No results found with that criteria :(
ADVANCED SEARCH
You are here: HomeCatalogueAudioConventional LoudspeakersMeyer Sound MJF-212A Package Used, Second hand
ABOUT THE PRODUCT ABOUT THE MANUFACTURER GLOSSARY

The Meyer Sound MJF-212A is a self-powered stage monitor loudspeaker designed to meet critical requirements in professional applications. Exhibiting flat amplitude and phase responses, full-range bandwidth, and exceptional impulse response, the MJF-212A far exceeds the capabilities of conventional stage Monitors while offering the simplicity of setup and operation provided by self-powered systems.
We named the MJF-212A in recognition of the role our 20-year relationship with the Montreux Jazz Festival has played in our product development history...Having so many musicians try it out at a major festival resulted in us getting a lot of valuable real-world opinions all very enthusiastic
The MJF-212A monitors phase-corrected frequency range of 55 Hz to 18 kHz enables accurate reproduction of both vocals and instruments with high gain before feedback, and provides excellent intelligibility at high output levels with low distortion and no coloration added to the signal. The MJF-212A is also engineered to have exceptional low-frequency headroom, which can be helpful in some applications such as the extreme low frequency demands of high-level drum monitoring. The face of the low-profile cabinet slopes at 40 degrees from the stage to permit optimal placement relative to the talent, while its medium-Q horn provides even coverage in both the horizontal and vertical planes.
The loudspeakers high-frequency section comprises a 4-inch diaphragm Compression Driver coupled to a symmetrical (50 degrees horizontal by 50 degrees vertical) constant directivity horn. A pair of high-power 12-inch neodymium magnet cone drivers with 4-inch voice coils, mounted in an optimally vented enclosure, reproduces low frequencies.
Each driver is powered by one channel of a three-channel class AB/H amplifier that employs complementary power MOSFET output stages to provide total burst output of 1275 watts (2 x 500 watts, 1 x 275 watts), 2550 watts total peak. The MJF-212A incorporates Meyer Sounds Intelligent AC system for automatic voltage selection, EMI filtering, soft current turn-on, and surge suppression.
The cabinet is constructed from premium birch plywood and coated with a durable, textured black finish. A metal grille lined with acoustical black mesh protects the drivers. The rugged MJF-212A includes plastic skids on the bottom of the unit to prevent damage to the enclosure or stage floor.
The MJF-212A can be integrated into Meyer Sounds RMS remote monitoring system with the addition of an optional module. RMS is a Windows-based computer application for monitoring the full-range of amplifier and limiter operating parameters. 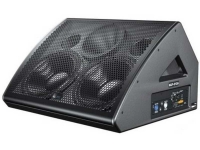