No results found with that criteria :(
ADVANCED SEARCH
You are here: HomeCategoriesAudio EquipmentConventional LoudspeakersMeyer Sound UPJ-1P Ex-demo, Like new
ABOUT THE PRODUCT ABOUT THE MANUFACTURER GLOSSARY

The UPJ-1P combines the advantages of self-powered systems with the placement and arraying flexibility afforded by a VariO rotatable horn. Though remarkably compact and lightweight, the UPJ-1P produces a robust linear peak SPL output of 125 dB with 18 dB crest factor, making it suitable for use either singly as a primary loudspeaker or in multi-cabinet horizontal or vertical clusters. Applications include audio-visual presentations, small- to medium-sized main sound reinforcement systems, fill, delay, effects, under-balcony or under-canopy coverage and distributed systems.
Meyer Sound designed the UPJ-1P for flexibility: whether oriented vertically or horizontally, it provides narrow, targeted coverage or wide coverage, with a simple turn of the VariO rotatable horn, changing its 80° x 50° coverage pattern between the horizontal and vertical planes. With a 10-inch low-frequency neodymium magnet cone driver and 3-inch diaphragm compression driver in the high-frequency section, the UPJ-1P delivers uncompromising quality and coverage.
Sophisticated amplification and protection circuitry produce consistent and predictable results in any system design. A proprietary Meyer Sound two-channel, class AB/bridged power amplifier with complementary MOSFET output stages provides a total output of 550 watts. Internal circuitry processes the incoming audio signal through an electronic crossover and correction filters for flat phase and frequency response, as well as for driver protection. Each channel has peak and rms limiters that prevent driver over-excursion and regulate voice coil temperature. Limiter activity is easy to monitor with the limit LEDs on the rear panel.
The modular, field-replaceable amplifier/processing package also incorporates Meyer Sound’s Intelligent AC power supply, which automatically adjusts for any line voltage worldwide and provides both soft turn-on and transient protection. The UPJ-1P is compatible with the RMS remote monitoring system, which offers comprehensive monitoring of loudspeaker parameters from a Mac or Windows-based computer running Compass control software.
The UPJ-1P’s end plates are made of heavy duty, high-strength, corrosion-resistant 6061-T6 aluminum. Strategically placed metric M8 threaded points allow simple mounting using eyebolts or directly to third-party pole assemblies. QuickFly rigging options including the MAAM-UPJ array adapter (also made from 6061-T6 aluminum), MUB-UPJ U-bracket and the MYA-UPJ mounting yoke assembly provide unprecedented mounting, flying and arraying flexibility. Other options include weather protection and custom color finishes for applications requiring specific cosmetics. 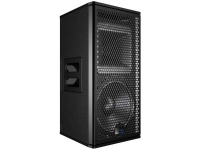