No results found with that criteria :(
ADVANCED SEARCH
You are here: HomeCategoriesLightingSpot Moving HeadsROBE Lighting ColorSpot 170 AT Used, Second hand
ABOUT THE PRODUCT ABOUT THE MANUFACTURER GLOSSARY

The ColorSpot 170 AT is designed for multiple applications and is ideal for architectural lighting, bars, restaurants, shops, retail environments, product launches and events and for use as an image projector for advertising.
The ColorSpot 170 AT offers many more features than its predecessor, including a new rotating gobo wheel, a new colour wheel, remote focus facility, "SLOT&lock" colour and gobo changing system, remote lamp on/off and very fast movement. It utilises a long-life lamp source. Onboard master/slave programming enables 300 scenes to be stored in the onboard memory - ideal for stand-alone operation and scenarios. 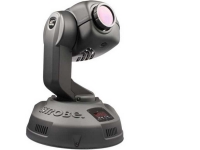