No results found with that criteria :(
ADVANCED SEARCH
You are here: HomeCatalogueLightingSpot Moving HeadsROBE Lighting Robin DLS Profile Used, Second hand
ABOUT THE PRODUCT ABOUT THE MANUFACTURER GLOSSARY

Encompassing all the new technologies develeoped for the MMX Spot, the WashBeam provides the lighting designer with a huge range of features and effects in a single fixture.

The ROBIN DLS Profile is the latest product in the DL range of luminaires that use the Robe RGBW LED module. The DLS adds a system of 4 fast, smooth, framing shutters within the optical path design of the proven DLX Spot format. There is individual control of each shutter blade position and angle, together with rotation of the complete framing module. As well as providing a sharp precise or soft frame for the projected image, the system produces a new series of effects through pre-programmed shutter blade shape and movement sequences. As with all models in the Robe DL luminaire range, the multiple shadows normally associated with an LED source have been eliminated. The Robe RGBW LED light source reproduces both rich and pastel colours at output levels normally associated with 1200 W discharge fixtures as well as pure whites at preselected 2.700, 3.200, 4.200, 5.600 and 8.000 kelvin colour temperatures. The tungsten emulation function allows the fixture to be integrated seamlessly into lighting schemes with existing traditional lanterns 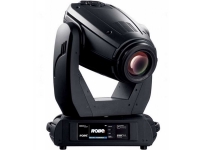