No results found with that criteria :(
ADVANCED SEARCH
You are here: HomeCatalogueAudioDigital Audio MixersSolid State Logic Live. L200 Package Used, Second hand
ABOUT THE PRODUCT ABOUT THE MANUFACTURER GLOSSARY

Since their introduction in 2013 SSL Live consoles have met widespread praise from many of the worlds leading live engineers. At ProLight+Sound 2017 SSL released the L200, a new mid scale console that brings the superb sound, accelerated workflow and advanced feature set of SSL Live to a new level of affordability.
SSL Live consoles are designed to help highly skilled operators deliver outstanding performances in the most demanding applications in Touring, Installation, Houses Of Worship and Theatre. Like all SSL consoles the secret to the success of the L200 is SSLs dedication to great sound. Part of the success is attributable to exemplary hardware performance throughout the signal chain: bringing SSL Studio grade mic pres to the stage, outstanding audio conversion, 96kHz operation and magnificent summing. There is a sublime transparency, definition and detail in the fundamental sound of the L200 that is difficult to describe but is immediately recognisable as the SSL signature. An equal, perhaps even greater part of the secret of the power of the L200 is however the way it enables operators to perform at their very best. The deceptively simple ergonomic excellence of the combination of multi-touch screen control with assignable hardware controls, the use of colour coding, the open architecture which lets engineers configure the console layout to suit their own way of working, the arsenal of processing options, the precision and depth of those processing tools and so much more it all combines to let the operator get where they can hear they want to be extremely quickly. Like all great creative audio technology, SSL Live consoles are instruments for engineers.

The key to a great control surface is a clear view of everything in your audio environment and finding exactly the control you need at your fingertips when you need it. With the Live SSLs obsession with ergonomics and workflow has delivered an intelligent, elegant and comfortable layout. All of the most commonly used functions are carefully arranged so that they sit within reach where your hands naturally fall on the console. There is a wealth of visual feedback with carefully considered use of colour change technology that will not fatigue the user during long periods of operation. The Live control surface delivers a genuinely intuitive combination of gestural touch screen & hardware control and a whole collection of innovative features designed to streamline workflow.

The Power to Connect

The power within SSL Live consoles is provided by our new Tempest platform, developed specifically to meet the demands of live production. We are of course very proud of our clever new processing technology, but at SSL our focus is always on what really matters and that is you having the power to do your job well. Live harnesses Tempests power in a sensibly flexible way to let you balance allocation of resource between signal processing and console architecture to suit each project. Thanks to the intrinsic flexibility of our approach, no matter how you configure it, when you compare the numbers, Live gives you more Inputs and Outputs, more Channels, Stem Groups, Auxes, VCAs and Masters, more processing tools and more signal processing power than many consoles with much bigger price tags.

Such stuff as dreams are made on

Live consoles are powered by Tempest, a next generation digital audio platform developed specifically to meet the demanding requirements of the live environment. Learning from more than 25 years of digital console development, Tempest is a ground up development. All legacy code the key to the sonic excellence of previous generations of SSL digital consoles  has been rewritten in the latest software languages. The high capacity signal processing engine at the heart of Tempest uses SSLs patented Optimal Core Processing (OCP) to deliver highly efficient and reliable performance with minimal latency. Tempest delivers all of the power required to equip Live with all of the mixer architecture, processing power and connectivity to handle large scale events. The Live signal processing engine is integrated entirely within the control surface.


Solid State Logic (SSL) is a manufacturer of high-end mixing consoles and recording studio hardware which is headquartered in Begbroke, Oxfordshire, England.
From groundbreaking audio consoles to innovative video production systems, Solid State Logic has evolved to become the world’s leading manufacturer of analogue and digital audio consoles and provider of creative tools for film, audio, video and broadcast professionals.
With more than 3000 SSL-equipped studios and facilities operational today, the excellence of SSL consoles is universally recognised for unrivalled sonic quality, superb ergonomics, outstanding automation and an international support infrastructure second to none.
Founded by Colin Sanders in 1969, SSL has since expanded to its present 15 acre science park in Oxfordshire, England. SSL's unrivalled resources, including R&D, manufacturing, training, service and product support, operate in a unique high technology, customer oriented environment.
The company invents, designs and manufactures technology for the creative manipulation of sound. Users and industry experts from all over the world visit SSL's Oxford HQ to consult with SSL audio experts and evaluate SSL equipment. There are more than 3000 SSL systems in service around the world.
Internationally famous musicians, producers and engineers working at the highest level of every musical genre choose SSL equipment to extend their creativity and ensure the highest possible quality of their finished product.
SSL technology is found in the most prestigious recording studios around the world has been used for countless hit recordings.
Independent post production companies working for multinational advertising agencies use SSL equipment to produce global advertising campaigns for the world's leading commercial brands.
Long-form video and major TV productions benefit from the unique qualities of SSL products the world over. Leading national and international broadcasters have similarly embraced the company's innovative technology to streamline operations and ensure high quality output.
The client list reads like a who's who in Radio and Television. It includes BBC UK, NHK Japan, ABC USA, Fox USA, NBC USA, CBS USA, NDR Germany, Swedish Television, RAI Italy and NOB Netherlands. 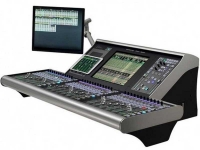