No results found with that criteria :(
ADVANCED SEARCH
You are here: HomeCatalogueAudioDigital Audio MixersSoundcraft Vi5000 Package Used, Second hand
ABOUT THE PRODUCT ABOUT THE MANUFACTURER GLOSSARY

Our patented Vistonics was designed from a simple start point - create the most intuitive digital mix interface available. Rather than arranging controls around or adjacent to a flat TFT screen, a system that requires constant hand and eye co-ordination and mental mapping, Vistonics simplifies the process and puts the rotary encoders and switches right on the touch screen.
With graphics behind the controls that change depending on the function, the operator is left in no doubt as to what parameter is being adjusted.
With the display and relevant controls combined in one area, the operator is immediately presented with a simple, clear mix system that streamlines workflow and enhances the creative process.
Each Vistonics interface controls eight input channels and comprises a touch screen with 16 rotary encoders and 16 switches. A simple touch in the desired part of the on-screen channel strip is all it takes to access channel functions including routing, input gain, digital gain trim, delay, high and low pass filters, 4-band fully parametric EQ, compressor, limiter, gate, de-esser and pan, with immediate access to a sophisticated visual status display and straightforward controls.
In addition, a dedicated Vistonics II interface is provided for output processing control, and also functions as a complete meter overview display for all 128 inputs and 32 busses, as a snapshot cue list display, and as a display for diagnostics information. 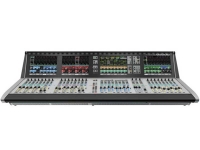