No results found with that criteria :(
ADVANCED SEARCH
You are here: HomeCatalogueAudioSound SystemsTW Audio T24-B30 Sound Package Used, Second hand
ABOUT THE PRODUCT ABOUT THE MANUFACTURER GLOSSARY

The top T24 was our first product and already embodies everything that defines TW AUDiO today. There is a fundamental difference between just bringing a horn loaded high­ power top to the market and having the ambition to build the lightest, smallest and most powerful 2x 12?/ 1.4? horntop worldwide. Without dis­ regarding the claims of the audiophile upper class the T24 is exemplary for the TW AUDiO philosophy.
With a complex horn­in­horn design it generates sound pressure above 143 dB peakSPL. We tweaked efficiency, impulse response and dispersion to the highest levels. Size and weight were reduced to the minimum.
And therefore this extremely compact top inspires with high power handling capacity, excellent dynamics and long throw as well as an optimum in vocal and speech intelligibility, even or especially when things have to get a bit louder.

The hybrid construction of our B30 with 2 x 15" speakers combines the advantages of bass reflex and horn systems ? high efficiency, great range and a deep low frequency limit. The connection to the acoustic field happens over the entire front area thus reducing air friction and flow losses to a minimum. The result is efficient energy transfer with simultaneous controlled impulse reproduction and excellent dynamics. And at almost 39 kg the B30 is a lightweight. The relation of its size, weight and output turns this TW AUDiO classic into something special. 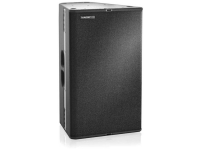