No results found with that criteria :(
ADVANCED SEARCH
You are here: HomeCatalogueAudioSound SystemsEastern Acoustic Works KF730-SB1000 Sound Package Used, Second hand
ABOUT THE PRODUCT ABOUT THE MANUFACTURER GLOSSARY

The KF730 line array system is optimized for a wide range of touring and installation applications. With its exceptional output to size ratio, KF730 is the ideal solution for those applications where high output potential and unmatched sound quality is required in a lightweight compact package including touring sound, corporate A/V, sports arenas, houses of worship, performing arts centers, hotel ballrooms and live clubs.
The KF730 delivers premium, high output, 3-way performance in an extremely compact and easy-to-use package. Dual 1 HF compression drivers and dual 7-in horn loaded MF transducers are integrated through a common horn that occupies the entire face of the enclosure. The exceptional pattern control offered by this configuration is extended even further (down to 160 Hz) as the MF devices are transitioned to a spaced array of two 10-in woofers. The pair of LF devices integrated within the MF/HF horn combined with the pair of side-mounted devices provides as much as 18 dB of off-axis rejection. EAW FocusedTM processing delivered via UX series processors precisely transitions from one system subsection to another while maintaining nearly perfect 110 degree control.
A full KF730 array provides seamless coverage from directly below the array to hundreds of feet in front. The vertical output can be tailored to match the requirements of any space by varying the splay at the rear of the enclosures as directed by EAW ResolutionTM 2 software. The resultant configuration repeatedly produces a continuous, coherent wave front of extended-range, high resolution audio over the entire defined coverage area. The versatile KF730 can also be integrated beneath KF740 modules to extend the reach of the range to any application imaginable. When extended low frequency performance is required, KF730 seamlessly arrays with its companion SB730 subwoofer and is also perfectly matched to the renown SB1002 touring subwoofer, allowing the system to be used for even the most demanding applications. Users also have the option of the KF737 module, which offers a 75 degree horizontal pattern for narrower venues. For long-throw applications, the optional Zero Degree Adapter Bracket enables modules to be 'flat-fronted', extending array size and SPL.

The sub bass loudspeaker systems shall incorporate 2x 18" LF transducer mounted in a vented enclosure tuned for optimum low frequency response. The drivers shall be mounted in angled internal baffles.
System frequency response shall vary no more than ±3 dB from 30 Hz to 100 Hz measured on axis with appropriate signal processing. The loudspeaker shall produce a Sound Pressure Level (SPL) of 99 dB SPL on axis at 1 meter with a power input of 1 Watt, and shall be capable of producing a peak output of 138 SPL on axis at 1 meter. The loudspeaker shall handle 2000 Watts of amplifier power (AES Standard) and shall have a nominal impedance of 4 (2x 8) Ohms.
The loudspeaker enclosure shall be rectangular in shape. It shall be constructed of 15mm thickness void-free cross-grainlaminated Baltic birch plywood and shall employ extensive internal bracing. It shall be finished in wear-resistant textured black paint. Input connectors shall be one each male and female AP4 and dual Neutrik NL4 Speakon. 4x 3-position flytracks (2 per side) shall be provided. The front of the loudspeaker shall be covered with a powder coated perforated steel grill backed with open cell foam to protect against dust.


Eastern Acoustic Works (EAW) is an American manufacturer of mainly professional audio reinforcement tools, such as loudspeaker systems and processors. From 1978-1988 it was located at 59 Fountain Street in Framingham, Massachusetts, and subsequently One Main Street in Whitinsville, Massachusetts.Eastern Acoustic Works was co-founded in 1978 by partners Kenneth Berger and Kenton Forsythe, who had previously worked together at Forsythe Audio.
EAW's first single enclosure system was the CS-3 designed for Carlo Sound in Nashville, Tennessee. It combined a B-215 dual 15-in low-frequency horn, a MR102 12-in mid-frequency horn and a Community BRH90 high frequency horn into one gigantic box, and was the first commercially available horn-loaded single enclosure box system.
In 1985 EAW became famous by developing the KF850 loudspeaker system. For many years this system was the standard among loudspeakers used for professional touring shows. With this system EAW gained much of its credibility in the professional audio industry. Carlo Sound and Sun Sound were among the first regional sound rental companies to receive the KF850's.
EAW also became well known for creating custom loudspeaker designs for specific projects and applications. Technologies developed for these designs have led to the development of many of EAW's standard products, which are mainly used in professional and commercial sound reinforcement applications, such as concert venues, music and dance clubs, theaters, stadiums, theme parks, and houses of worship.
In 2000 EAW was purchased by Mackie Designs, Inc., now called LOUD Audio, LLC.
In 2018, EAW was purchased by RCF, to be run as a separate entity. 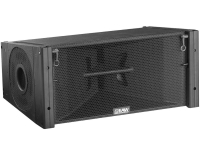