No results found with that criteria :(
ADVANCED SEARCH
You are here: HomeCategoriesAudioAudio AmplifiersLAB.Gruppen PLM 10000Q Used, Second hand
ABOUT THE PRODUCT ABOUT THE MANUFACTURER GLOSSARY

The PLM 10000Q includes a revolutionary set of tools for fast, accurate load verification and real-time performance monitoring. The key to both features is the LoadLibrary, a comprehensive database that provides unique 'Fingerprints' (load characteristics) for each loudspeaker model in the system.

Lake Controller software provides a unified interface for control and monitoring of all functions of the Powered Loudspeaker Management system. In addition to controlling all parameters of standard Lake Processing (therefore appropriate for use with Dolby Lake Processors), all new versions provide control and monitoring of exclusive PLM features: digital input gain and attenuation, and load verification and performance monitoring via LoadSmart and SpeakerSafe.
The flexible Lake Controller software environment can control extensive networks of powered loudspeaker management systems from a single computer.
The user interface is based on discrete processing modules, with each module assigned to power outputs normally defined for sets of band-limited drivers (e.g. low, mid, high, subs).
Adjustments can be made in real time to any parameter of any module on the network. Modules may be assigned to groups representing subsystems in larger systems, such as main arrays, delays, and fills in an arena system.

The PLM Series Powered Loudspeaker Management systems are equipped as standard with Dante, a self-configuring digital audio networking solution from Audinate of Australia.
Based on the newest developments in networking technology, Dante provides reliable, sample-accurate audio distribution over Ethernet with extremely low latency.
Dante incorporates Zen, an automatic device discovery and system configuration protocol which enables PLM Series products and other products with Dante (like Dolby Lake Processors) to find each other on the network and configure themselves. 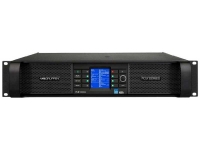