No results found with that criteria :(
ADVANCED SEARCH
You are here: HomeCatalogueAudioSound SystemsNEXO GEO S805-S830 RS15 Turn-Key Sound Package Used, Second hand
ABOUT THE PRODUCT ABOUT THE MANUFACTURER GLOSSARY

Since its introduction in 2002, the GEO S805 has consistently demonstrated a remarkable ability to project coherent sound over long distances. Arrays of up to 23x S805 Vertical Tangent Array Modules and 1x S830 Horizontal/Vertical Tangent Array Module have been deployed for large indoor and outdoor events, with consistently excellent results in the reproduction of music and speech.
The high output neodymium drivers, the patent-pending Hyperboloid Reflective Wavesource and Directivity Phase Device that provide coherent coupling of multiple drivers in large arrays, and the optimized protection of the NX242 Digital TDcontroller combine to produce an unprecedented level of efficiency.

The compact GEO S830 is a high-output array module intended for horizontal tangent arrays or as a downfill element in curved (tangent) vertical arrays to establish consistent SPL in all coverage areas. The HRW allows the 30° S830 and 5° S805 to be coherently arrayed together. GEO S Series loudspeakers ship with 120° dispersion (in the non-coupling plane) Configurable Directivity Devices (CDD), but are field-changeable to 80° CDDs. To maximize down-fill coverage, CDFs are used on GEO S830s for the bottom two rows of curved vertical arrays. 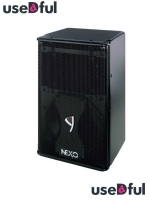