No results found with that criteria :(
ADVANCED SEARCH
You are here: HomeCatalogueAudioSubwoofersNEXO RS15 Used, Second hand
ABOUT THE PRODUCT ABOUT THE MANUFACTURER GLOSSARY

The RS15 uses two 15? long excursion Neodymium drivers drivers in a low profile cabinet to extend system response down to 35Hz. NEXO?s patent pending RAY SUB Technology is based on optimising the positioning and phase relationships of radiating surfaces in vented enclosures, permitting acoustic distance from rear to front sections to always increase as frequency decreases. Consequently rear and front sections sum up efficiently over the entire subwoofer bandwidth, allowing for an average of 5dB gain from the rear section in the forward direction and cancelling in the rear direction. 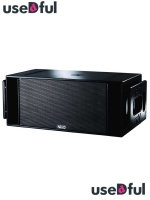